Today is the birth as well as death anniversary of Ingrid Bergman , one of the most celebrated actresses who worked in European and American Cinema. Born this day in Stockholm in 1915, she started with Swedish films and became a leading actress . Her stint in the American cinema started with a film Intermezzo- A Love Story (1939), a remake of the Swedish film Intermezzo (1936) in which she had worked before. Despite her inability to speak English, she went on to work in movies like Adam Had Four Sons, Rage In heaven, Dr.Jekyll and Mr. Hyde, in 1941. She is best known for her role in the classic film Casablanca (1942), in which she appeared opposite Humphry Bogart . She also worked in For Whom The Bell Tolls (1943) a film based on the novel of Ernest Hemingway, bearing the same name. Even Hemingway felt that Bergman was best suited for the role. She also worked in Gaslight ( 1944 ) which won her the Academy Award for the Best Actress. The Bells of St. Mary’s, a 1945 film won her nomination for the best Actress Award. 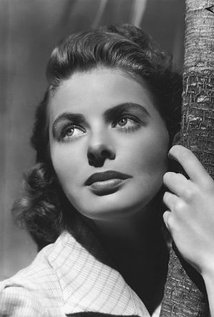 She also starred in Alfred Hitchcock films , Spellbound, Notorious and Under Capricorn. She also received the Best Actress nomination for her role in Joan of Arc. She worked in five Italian films also.
In her acting career she won three Academy Awards, two Emmy Awards, four Golden Globe awards , one BAFTA award and the Tony Award for Best Actress.
She died of breast cancer this day in London, in 1982 aged 67.
Our humble tributes !
Posted by aarkay at 10:03 AM