Today is the birth anniversary of Henry Cavendish, FRS, the eminent British Scientist who discovered Hydrogen.He called it 'inflammable air'. However it was another scientist named Antoine Lavoisier,who gave the name Hydrogen to the element.The accompanying picture was there in some of Chemistry textbooks in our time and fascinated us.
Our humble tributes ! 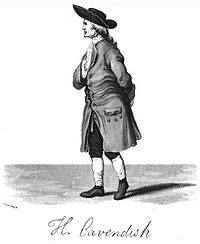