A lesser known and the least discussed name in Hindi cinema , Meena Shorey was a beautiful and talented actress who strode the film world in the ‘40s and ‘50s in India and 1956 onwards in Pakistan. Born Khursheed Jahan in 1921 , in Raiwind, Punjab, she started her acting career in 1941 with Sohrab Modi’s film Sikander, in which she played a character role. Married for the third time to Roop Kumar Shorey in mid ‘40s, she became famous as an actress when she acted in Ek Thi Ladki , a film produced by her husband in which she appeared opposite Moti Lal, a leading actor of the time.The story of the film was written by I.S.Johar who also acted in the film . She came to be known as the ‘ Lara Lappa girl’ , after a song ‘ Lara Lappa Lara Lappa Lai Rakhda…….’ picturised on her became a hit.The song is popular and is played even today. 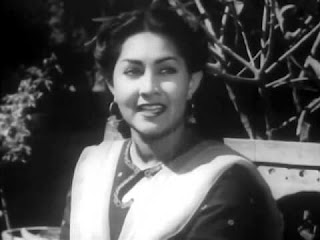 Her another popular film was Dholak, in which she appeared opposite Ajit . All the songs of this film became hits. The duet ‘ Magar Aye Haseena-e- Bekhabar - ….’ beautifully sung by Muhammad Rafi and Sulochana Kadam and a solo ‘ Chori Chori Aag Si Dil Mein Laga Kar Chal Diye…….’ hit the Charts. The films she acted in include Ek Thi Ladki, Dholak, Ek Do Teen, Chaman, Actress , Sikander, Aag Ka Dariya , Prithvi Vallabh , Anmol Rattan, Phir Milenge , Pattharon Ka Saudagar, Bhai Jaan , Chandu .
In 1956 on an invitation from a Pakistani producer J.C.Anand, the Shorey couple went to Pakistan and made a movie Miss 56, almost a remake of Madhubala’s block buster Mr. & Mrs. 55. While her husband returned to India, she chose to stay back in Pakistan as she was well taken there. She continued to act in films and also modelled for Lux and became the first Pakistani actress to do so. She was known as the ‘Lux Lady Of Pakistan’. Many of her films there like Sarfarosh, Sitaron Ki Duniya, Bada Aadmi, Jagga, Mausikaar , Andhi Mohabbat, Khamosh Raho became hits .
Driven to penury after her career was over, she died on February 9, 1989 in Lahore.

Our humble tributes !
Posted by aarkay at 5:57 AM