Today is the death anniversary of YASH CHOPRA, the noted film producer and director of Hindi Cinema. A younger brother of the iconic Producer / Director B.R.Chopra, he started as an assistant to I.S. Jauhar. His maiden directorial venture was B.R.Chopra's Dhool ka Phool which became a box office hit. Another movie Dharamputra also was popular at the box office. To him goes the credit of directing Waqt , the first multistar movie of Hindi Cinema.In 1969 he directed two more movies for B.R.Chopra namely Aadmi aur Insaan & Ittefaq, the latter without any song. 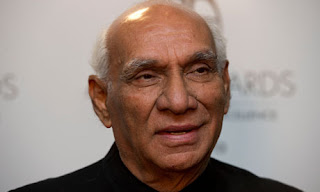 Starting his own Yash Raj Films in 1971, he gave many hits like Deewar, Kabhi Kabhi, Silsila etc. Passing through a lean phase in most part of the '80s, success came to him again with Chandni, a heroine oriented film with Sridevi in the lead.His 1991 movie Lamhe despite having all the merits of a good movie, did not do well at the box office.He was also associated with the movies Noorie, Dil Toh Paagal Hai, Dilwale Dulhaniya Le Jaayenge , Trishul, Kala Patthar,Vijay, Faasle, Darr, Parampara, Veer Zara and many others.
Many awards and honours came his way.
He died this day in 2011 aged 80.
Our humble tributes !
Posted by aarkay at 5:35 AM