Today is the birth anniversary of Sachin Dev Burman or S.D.Burman, the great film music director, composer and a singer.A scion of Tripura royalty, he began his career from Bengali films in 1935. His first Hindi film as composer was 1946 film Shikari.A versatile composer, the tunes he composed for film songs were folk, semi classical and classical. All well known playback singers of the day, Muhammad Rafi, Mukesh, Manna De, Hemant Kumar, Talat Mehmood, Kishore Kumar, Mahendra Kapoor,Suraiya, Lata Mangeshkar,Asha Bhosle and Geeta Dutt sang for him . 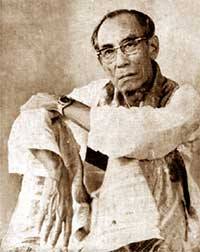 In fact Kishore Kumar owed his singing career to S.D.Burman who gave him a break and together they enjoyed some chemistry.Muhammad Rafi and Kishore Kumar sang almost an equal number of songs for him.
A veteran of about a hundred films, his Hindi films include Bhai Bhai, Taxi Driver, Sujata,Shabnam, Vidya,Afsar,Sazaa, Baazi,Bahaar, Jaal,Munim Ji, Kala Pani, Lajwanti, Solwaan Saal , Kaagaz ke Phool, Bombay ka Babu,Guide, Teen Deviyaan,Aradhana and many others.
He also sang a number of Hindi and Bengali songs.The extent of popularity can be gauged from the fact that the Cricket icon Sachin Tendulkar is named after him.
Our humble tributes to the great composer and music director !
Posted by aarkay at 6:03 AM