Today is the birth anniversary of JEEWAN ,the Bollywood actor. Born Omkar Nath Dhar this day in 1915 in Srinagar , he was a Kashmiri who remained active in films for five decades i.e. ‘40s through ‘80s.He had acted as Narad Muni in almost 60 films and in a radio program presented by him and dedicated to army jawans he had stated that God dare not send him to hell as he had chanted Nayaran Narayan thousands of times. 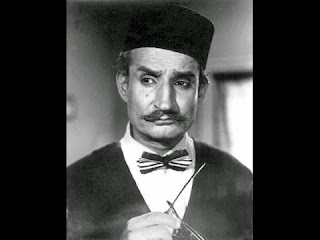 His very presence in the cast would guarantee that some sinister designs were a part of the storyline .He was also the most hated villain of Hindi Cinema which is a tribute to his acting talent. Almost all the films he acted in were hits. .

Our humble tributes to this marvellous Actor !
Posted by aarkay at 6:22 AM