Today is the death anniversary of Ravindra Jain , a highly talented music composer and a lyricist.Born with visual handicap, he was a gifted singer and started singing bhajans at public functions at a very young age.Seeing his talent his father had him trained in classical music by various Gurus.
He started his career in the films in the early '70s and the music composed by him for the film Saudagar brought him name, fame and recognition.He went on to compose music for films like Chor Machaye Shor,Geet Gata Chal, Chitchor, Dulhan Wahi Jo Piya Man Bhaye,Paheli and Akhiyon Ke Jharokhon Se. 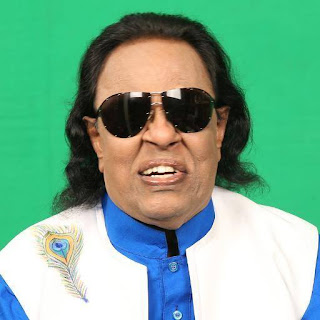 All the melodies became hits.He also composed music for Ram Teri Ganga Maili, Do Jasoos, Henna,Pati Patni Aur Woh , Insaaf ka Tarazoo etc etc and also for some mythological films.
He was an acclaimed poet and a lyricist.
Invited as one of the judges to some talent hunt programs on TV, he was seen reciting poetry instantly composed . This left one amazing.
Many awards and honours came his way including the Film fare Best Music Director award.
He died this day in 2015 of multiple organ failure aged 71.

Our humble tributes !
Posted by aarkay at 8:35 AM