Today is the birth anniversary of OM Puri, the highly talented actor of Hindi Cinema who also worked in British and Hollywood films.Born Om Prakash Puri this day in 1950 at Ambala in today's Haryana, he was forced to work at a very young age and did odd jobs due to family circumstances. His passion for theatre and acting led him to National School of Drama and later to Film and Television Institute,Pune.
Om Puri made his debut in Marathi film Ghasiram Kotwal based on 1972 play of Vijay Tendulkar and was recognized as an actor.He made his mark in mainstream as well as Art Cinema and worked with the likes of Amrish Puri, Nasiruddin Shah, Shabana Azmi and, Smita Patil in films Aakrosh, Arohan, Sadgati, and Tamas Ardh Satya , Mirch Masala and Dharavi in which his performance was widely acclaimed. 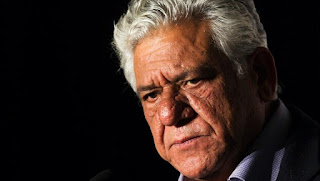 A versatile actor, he also worked in comedy films like Jaane Bhi Do Yaaro , Chachi 420 ,Hera Pheri, Malamaal and many others. His talent was spotted by the Western film world. He had a role in Richard Attenborough's international film Gandhi He also worked in British films like City of Joy, Wolf , The Ghost and the Darkness,My Son, the Fanatic,
Such A Long Journey, East and East , West is West and some others.
His role of Zia ul Haq in Star Wars also brought him acclaim.
His TV serial Kakka ji Kahin became very popular.
His second wife Nandita Puri, a journalist came up with his biography titled The Unlikely Hero.... which being a no holds barred candid account , caused him anguish and due to some other reasons also, the couple parted ways.
Many awards and honours came his way like the National Award for the Best Actor which he won twice, The Film Fare Award for Best Actor, The Lifetime Achievement Award and Padma Shri.
He died on January 6 this year of heart attack aged 66.
Our humble tributes to the highly talented and a versatile actor !
Posted by aarkay at 6:50 AM