Today is the birth anniversary of R.K.Narayan, the eminent Indian writer in English, who alongside Mulk Raj Anand and Raja Rao enjoys the pride of place for being the early writer to be published abroad.The British writer Graham Greene was his admirer and helped getting him published in England.An imaginary place called Malgudi forms the centrepiece of his fiction and one of his works is titled Malgudi Days.Malgudi Days was also made into a TV serial. 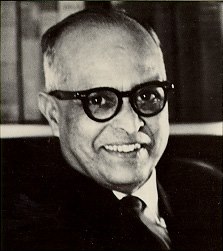 His semi autobiographical Trilogy consisting of Swami and Friends, Bachelor of Arts and The English Teacher, are his masterpieces. His novel Guide was made into a classic film of the same name.
For the narrative style and his characterisation, he is often compared with William Faulkner and Guy de Maupassant.
He was a recipient of Sahitya Academy Award and was also honoured with Padma Bhushan and Padma Vibhushan.
He served a tenure as nominated Rajyasabha MP.

Our humble tributes to the great writer !
Posted by aarkay at 3:37 AM