Today is the death anniversary of Jagjit Singh, the renowned Ghazal singer, composer and music director. Known as the Ghazal King ,he along with his singer wife Chitra Singh made waves during the 70s and 80s with soulful renditions of Urdu ghazals and Punjabi songs.Stricken and shaken with the personal tragedy of the loss of a young son, the couple came out with 'Marasim' a collection of sad soulful ghazals which was their last album together,as Chitra felt too overwhelmed to continue singing. 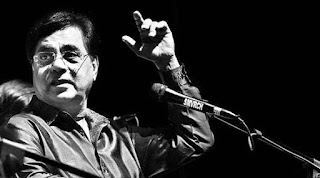 A singer with a huge fan following in India and Pakistan, his live concerts were something to marvel at.A singer across the border mostly sings his songs .
A recipient of Sahitya Academy award in 1998 & Padma Bhushan in 2003, Government of India also issued a commemorative postal stamp in his honour in 2014.
Our humble tributes to the maestro !
Posted by aarkay at 3:43 AM